“Within the framework of its research, professional integration and international cooperation policies, ésam Caen/Cherbourg associates with Bubahof in order to foster students mobility to Czech Republic as well as international experience for graduates and cultural and artistic projects involving research. On a yearly basis, Bubahof provides an accommodation and a working space in its premises for artists, researchers, curators and staff from ésam Caen/Cherbourg involved in these projects.” 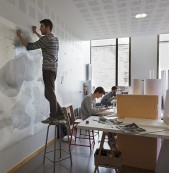 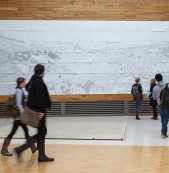 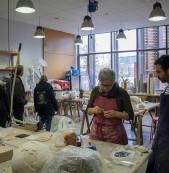 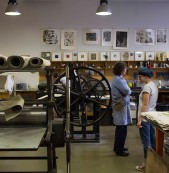 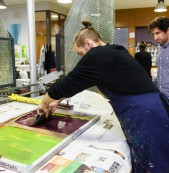 Caen/Cherbourg esam welcomes almost 300 students on its two campuses in the disciplinary fields of Fine Arts and Graphic Design:
– Premises in a new building designed by the studioMilou cabinet that opened its doors in October 2009 on the Caen peninsula;
– Entirely renovated premises that opened their doors in October 2011 in the former maritime hospital of Cherbourg.

Libraries: The libraries located on each of the two campuses of ésam Caen/Cherbourg provide up a fund of references and resources for visual and contemporary art from the 20th century to today, that is to say over 27,000 documents in printed form (monographs, exhibition catalogues, essays) audiovisual documents (CD-Audio, DVD, CD-Rom), periodicals (art reviews, French and international graphic design reviews).

Student workshops: workshops with an area of 100 and 200m2 allow each student to benefit from an adapted workspace within the school throughout the year so as to imagine and carry out their personal projects. The pedagogical exhibition spaces allow them to present their work in professional conditions during evaluations or when passing degrees.

A large (200m2) exhibition gallery located on Caen campus that hosts exhibitions of school graduates in addition to other exhibitions by artists from outside of the school, programmed in the framework of cultural partnerships.

ésam Caen/Cherbourg has been running a programme of international cooperation and exchanges for over 30 years : joint workshops and exhibitions, residency programs, field trips, student and staff mobility…